Back in 1992 I was a student in Sheffield. Money was quite tight, but when my Walkman broke I splashed out and replaced it with a Panasonic RQ-S15. I remember choosing it because it was so small (hardly any bigger than a cassette) and I think even back then I’d decided that this was probably the last “Walkman” I was ever going to buy, so I wanted a good one. 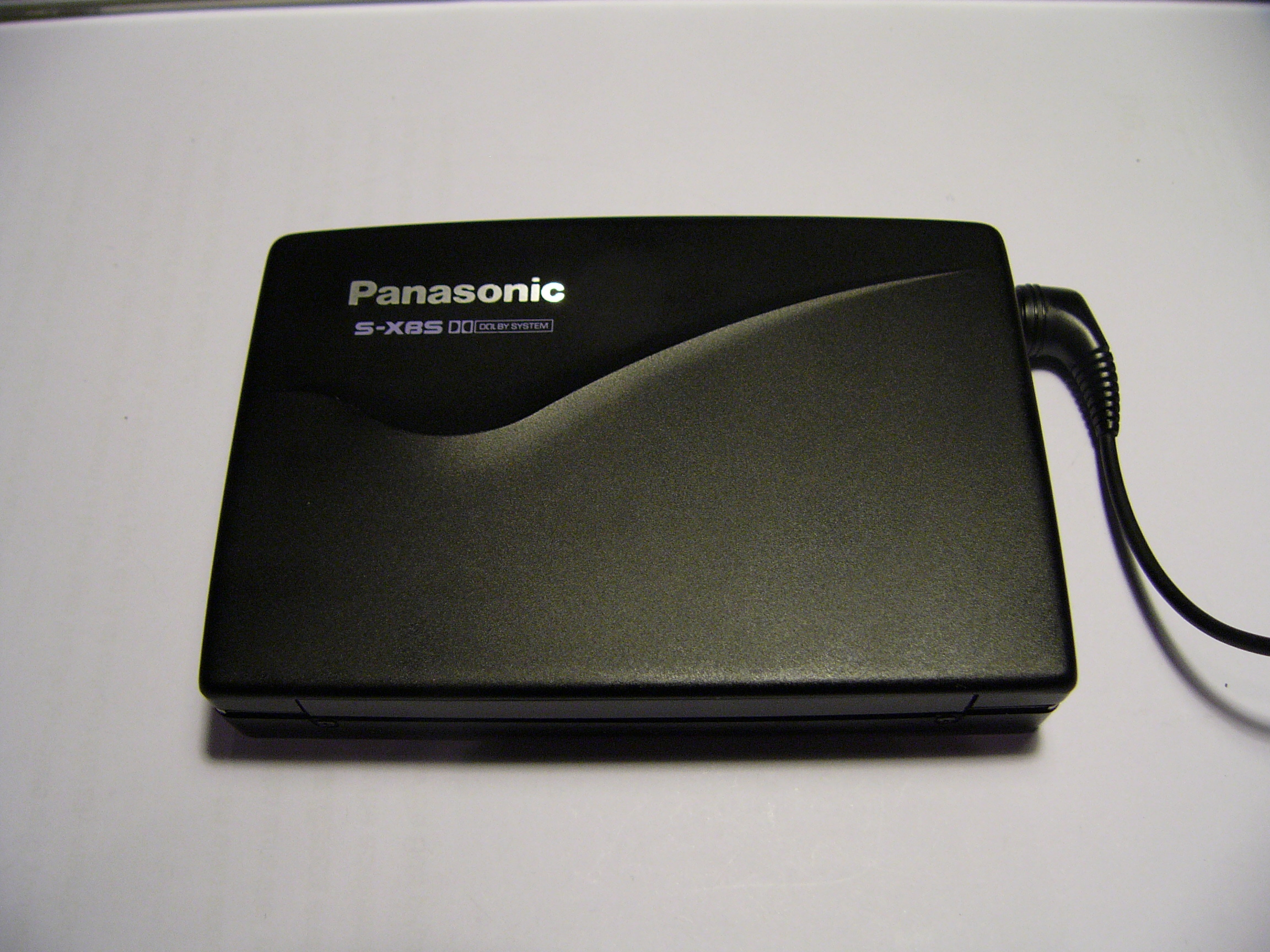 Looks lovely, eh? I looked after it really well. I always carried it in the little protective bag it came with, after a scare where I thought I’d scratched it within minutes of getting it home. 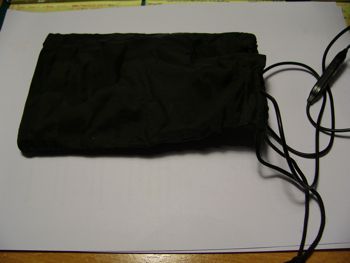 I remember it like it was yesterday, I was sat on my bed listening to it, while also browsing some coursework in a large binder. The binder had a metal protective edge down the end, and it scratched over the decorative swoosh on the front of the player. Fortunately it didn’t leave a mark. 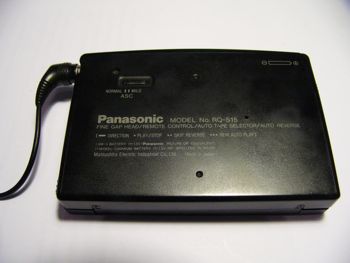 One reason it’s still in such good condition is because I packed it away very carefully the last time I used it, in the plastic case that Panasonic helpfully provided. The case is even designed so that you can leave the player in it while you’re listening to it - there’s a hole in the side for the headphone lead, and a space in the cutout for the player so that the headphone plug can be accommodated. I have no clue as to why anyone would want to listen to it inside a box which is probably 15 times the size of the player. 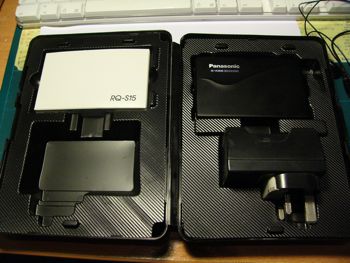 I even remember thinking that the rechargeable battery probably wouldn’t survive in storage for many years, so I removed it from the player and stored it in a separate plastic bag when I packed it away. Probably a good idea as it seems to have corroded at the terminal. 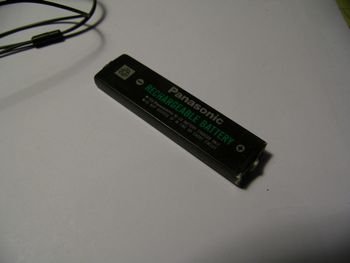 Would you believe I still have the instruction manual too? 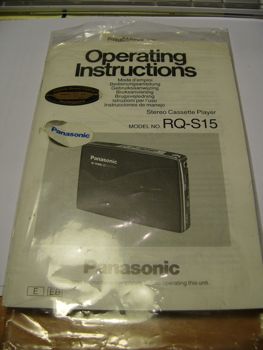 Not only that, I have the original receipt and extended guarantee card. I paid £20 to extend the guarantee to 2 years - not something I’d recommend these days (extended guarantees are a rip-off) but at the time it seemed like a good idea as I wanted this one to last. 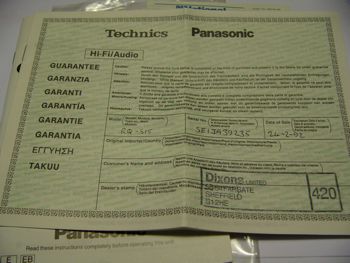 Dixons is still there at 58-64 Fargate. I expect Daniel is long gone - he was the assistant that served me, according to the part of the receipt I didn’t get into the photo. 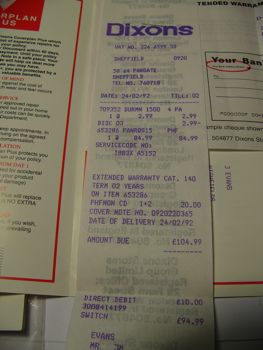 It seems that I got them to throw in a 4-pack of Duracell AA batteries. Probably because I bought the extended warranty. The RQ-S15 was £84.99, which was a huge amount at the time, especially as I was a poor student.

Last night I was feeling nostalgic, which is why I dug out the Panasonic. I had to go into the loft to find some tapes, and eventually located a small bag full. I don’t know what happened to all the really expensive metal tapes I’ve bought over the years, I’m guessing they got thrown out when I moved house 12 years ago. Ah well.

I selected Queen / Sheer Heart Attack, and lay down in bed to hopefully fall asleep listening, as I used to do. After three tracks the tape snapped. D’Oh!

What you’re (read: I’m) asking is, what does it look like inside? Well, if you remove the lid you can see how small it is compared to the tape. 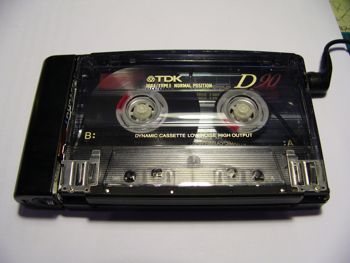 The AA battery holder is screwed to the side in that picture because the rechargeable is unusable.

If you take the back off it, you can see the circuit board, and a few mechanical components peeking through. 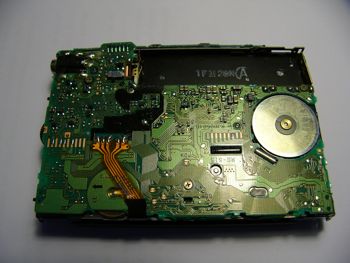 Even by modern standards the miniaturisation is pretty good. To go further than this, you have to de-solder the motor, battery connections, and a little solenoid which is used to change mode (auto reverse, fast forward, rewind etc.). That’s the only real difference between this and a modern unit— in a modern device it’s very rare that you have to de-solder anything to aid disassembly.

Once you’ve de-soldered the connections you can fold the circuit board out of the way (still attached to the tape head) and view the mechanism. 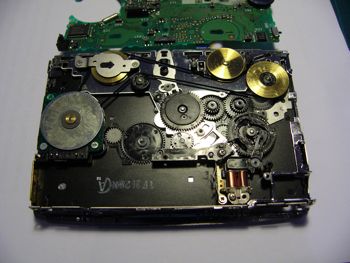 I wonder if mechanical miniaturisation design skills like this are going to be lost to the world now everything is solid state?

The only “inputs” to the mechanism are the motor and the solenoid. The motor rotates one way for play and the other for fast forward and rewind. The solenoid shifts a gear with missing teeth into a position where the non-missing teeth bite, and this is used to shift mode.

When you insert a tape, it spins the spools a few turns to take up the slack in the tape. It also defaults to playing the outward-facing side whenever a new tape is inserted. 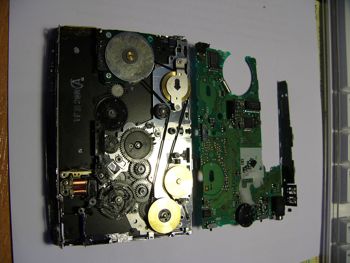 The unit is so small there is no room for a retracting tape head, so the head remains in position all the time. There is a small device over the front of the head which pushes back the little pressure pad inside the tape whenever fast forward or rewind is selected, which always struck me as a particularly elegant solution. 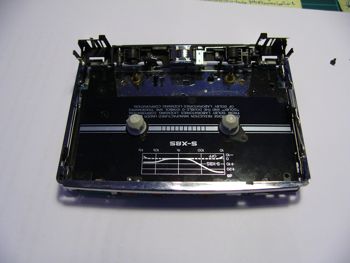 There is a remote control in the headphone lead. Brief instructions are provided on the back of the player, basically you click the button briefly for stop / play, twice for fast forward, three times for rewind, and hold it down for auto reverse. 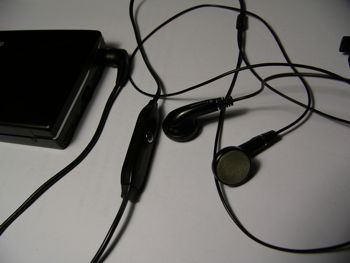 It still works fine (yes, even after reassembly). It’s a bit “hissy” compared to modern devices (like my iPhone). I also think the head could do with a clean to make the sound a bit less muddy, but maybe it actually sounds as good as it ever did, and I’m just more used to the better frequency response you get from digital sources?